If I were to pinpoint the feature of the Internet that has the greatest potential to change human society and culture, I would nominate Bittorrent.  It's a very simple file sharing application that allows you to download files from other users, while these users download from you. Copying and sharing music, movies and books has never been easier or less costly. At any moment, according the Wikipedia, bittorrent accounts for more internet traffic than Facebook and Youtube combined. I've always thought that a part of the pleasure we get from a work of art comes from sharing it with people whose feelings we care about. This pleasure in sharing is something that all humans have - we should not give up our freedom to share lightly. Property rights exist, to be sure, but we should be very careful about letting them infringe on our right to share as we see fit. 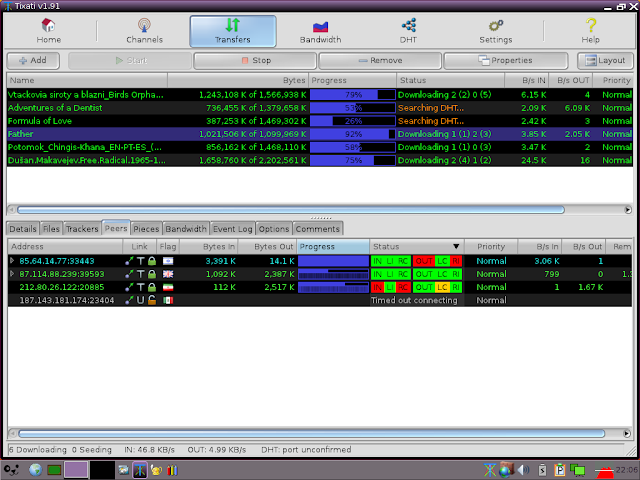 Above is a screen capture taken from my computer on December 1st. I'm using a bittorrent client called Tixati and I'm downloading a bunch of files - mostly films made in Eastern Europe in the 1960's. One in particular is singled out. It's name in English is "Father," "Apa" in the original Hungarian. It was made in 1966 by the director Istvan Szabo, the only Hungarian film director to win an Oscar for the 1981 film Mephisto. Both these films are centred on the plight of Jews under Naziism.

What I want to focus on, however, is a small part of the bigger picture. I've blown it up here: 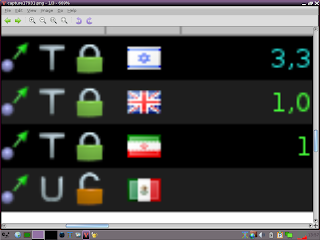 This tells us that there is a seeder, someone who has the entire file and letting others download, without receiving anything. The seeder is in Tel Aviv, as the Israeli flag at the top and a trace of the IP address indicates. There are three leechers, those, including me - the Mexican flag at the bottom - who haven't yet completed the download of "Father." The other two leechers are from Sheffield, England, and Teheran, Islamic Republic of Iran. Yes, the third flag is Iranian.

Our exposure to the relation between Israel and Iran, exemplified by a google search of the words "israel iran" is not positive. The links I get all point to stories of conflict, threats, defamation, and distrust. Page after page it continues. Yet, with this screen capture I have pretty strong evidence that someone in Teheran is downloading and will presumably watch this work of Jewish culture, and it's thanks mainly to the generosity of someone in Tel Aviv that this is possible. It's very likely that these people don't know they are sharing. Not all bittorrent clients feature the flags, and most users don't spend much time  'under the hood,' so to speak. But the sharing is happening, whether they know it or not, regardless of the overwhelming negativity that characterizes their relations. Our new media thrive on the negative, while with bittorrent, goodwill, trust, and cooperation are built into the system. This is probably getting close to why I have such a regard for file sharing.

This is my first post of December and Christmas is coming. Instead of putting your presents under a tree, why not share them on bittorrent? You just don't know who will appreciate your generosity.