I started this series on East European film of the 1960s and this film from Tajikistan will be the second installment. I know it's a bit of a stretch, a 10,000 kilometre stretch to count Tajikistan, which borders on Afghanistan and China, as part of Eastern Europe, but Hasan Arbakesh (Hasan the cart driver) is so wonderful, so under-appreciated and still so contemporary, I feel its inclusion is justified. Besides there are large swaths of Eastern Europe - Romania, Bulgaria and surprisingly East Germany that don't seem to have produced any cinema of note during the same period. 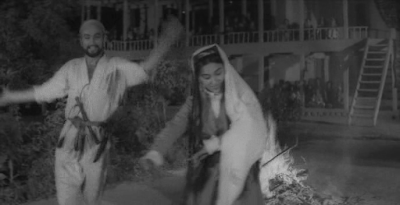 Hasan Arbakesh was made on location in Tajikistan, the poorest of the Soviet republics, in 1965 by the director Boris Kimyagarov, a Jewish native of Tajikistan, celebrated today as the father of Tajik cinema. 1965 was a time known as the "Thaw," a narrow window of tie when censorship was relaxed and heretofore forbidden topics and themes were explored. Alexander Solzhenitsyn first came to notice during this period.

It's not a technically or artistically innovative film, but well made in every respect. The director obviously has love for his homeland, its scenery and a good many of its folkways. The star, Bimbolat Vatayev, in his first leading role, is full of charisma, singing, dancing, loving, and fighting as well as any hero can be expected to. Hasan Arbakesh is structured as an epic, echoing the Herculean exploits of the Persian bard Ferdowsi's masterwork, Shahnameh. Hasan's horse is named Rakhsh, after Ferdowsi's hero's horse, although the cart he pulls is a disconcertingly crude contraption. The plot culminates in Hasan successfully discharging his tasks but he is left with only the very dubious rewards on offer by the new Soviet regime.

The film is set some time in the 1920s when the dust of the revolution and the civil war is settling but the Soviet ways are not quite accepted. We see the collectivisation, industrialisation and emancipation the Soviets have brought along them them, and while not explicitly condemned, to our characters, the new era brings bitterness, sacrifice and loneliness. All the qualities that made Hasan a hero count for nothing.

Recently I listened to a lecture on how Stalin incorporated Kazakhstan in the USSR, making the rather perverse effort to shape a clan-based nomadic society into a nation. Somehow, having had a national identity retrofitted, so to speak, for them the Kazakh people could more easily pass on to the higher stage of socialism. Now in Hasan Arbakesh, the only nation building I saw going on was of the Soviet variety, but it's worth noting that Kimyagarov drew on precisely the same sort of epic source material that Soviet historians used for their work in Kazakhstan. It seems that whatever the success the Soviets had in instilling a national consciousness in the people of Kazakhstan, their efforts in Tajikistan were a failure. With the collapse of the Soviet Union in 1992, Tajikistan was plunged into a vicious clan-based civil war and the non-Tajik inhabitants, predominantly Russians and Jews, fled to Russia.

Perhaps Hasan Arbakesh represents a golden era of Tajikistan, a time of peace, prosperity and artistic license, if not freedom. It also recalls the Soviet occupation of Afghanistan, at least as far as the women of Kabul are concerned. In one scene we see the outraged women tearing off their veils and throwing them into a fire! In an era when religious fundamentalism is rising from the Soviet grave, the film has renewed relevance. It´s available via bittorrent by itself which I will try to maintain, or with a group of other central Asian films which I won´t.
Posted by Unknown at 2:19 PM